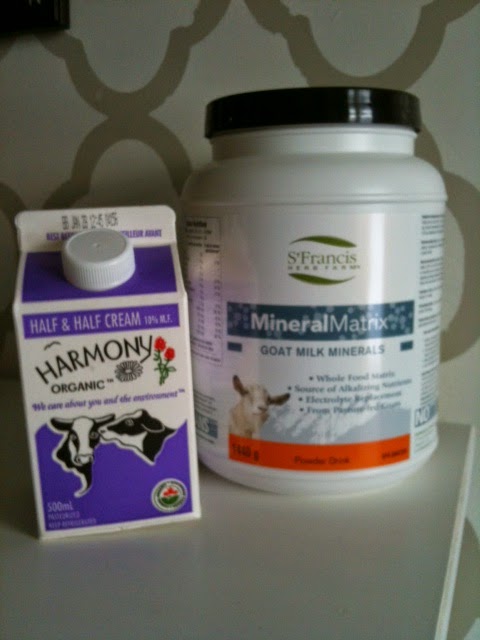 We know our kids don't get the same amount of minerals as past generations have - our food unfortunately is not grown in the same mineral-rich soils (over-harvesting and over-production), processed foods and grains which have stripped the nutrients from our food, the hybridization of grains that have changed their composition, and having moved away from our traditional nourishing diets (organ meats, bone broths, unpasteurized milk, healthy fats etc).

What can we do? Making bone broths is a great strategy, but you may find you don't have the time to do it regularly (I know I don't). This is one of my favorite 'quick' methods of getting those minerals into my kids that supposedly is as dense as bone broths (and they LOVE it - they call it their 'hug in a mug'). I offer this most mornings before breakfast to warm them up - add 1-2 TBSP Mineral Matrix (by St. Francis) into a mug, top 3/4 with boiling water, and the other 1/4 with organic cream/milk/almond milk and 1 tsp honey/maple syrup and serve.

I prefer the cream because it's SUPER creamy, and as long as it's organic the fats in the cream will slow down digestion and minimize the blood sugar rise from the honey, keeping your kids energy nice and steady. YUM!

Posted by Vitality for Life at 4:30 AM No comments:

In less than a week, we are starting an event that we've never done before, and is a way for us to say THANK YOU for all your support and offer you some amazing deals. I'm very excited to announce that this holiday season we will be running our own '12 Days of Christmas'. Starting Monday December 1, 2014 (just in time to get the products to you for the Holidays) we will be releasing a new and exciting ONE DAY ONLY coupon to our FACEBOOK and TWITTER followers. Every day will be a different sale, giveaway, or BOGO deal so if you see something you like, jump on it, or share it with someone that you know could use it! Mark it in your calendar, and let's have some fun!!
#12DaysOfOliveBaby

Posted by Vitality for Life at 4:16 AM No comments:


There are many dangerous and toxic ingredients that can be found in our skin care products, and it’s hard to make sense of them all without having a chemistry background! In addition, every country also seems to have their own regulations for the use of these substances, which makes the situation even more confusing if you’re buying products across borders. In Canada for example we rely strongly on the testing and standards laid out by the FDA in the US, which at times can be driven strongly by political issues and funding. The European Union has stronger regulations on many of these chemicals, and we often refer to their findings when it comes to Health Canada regulations and legislation. 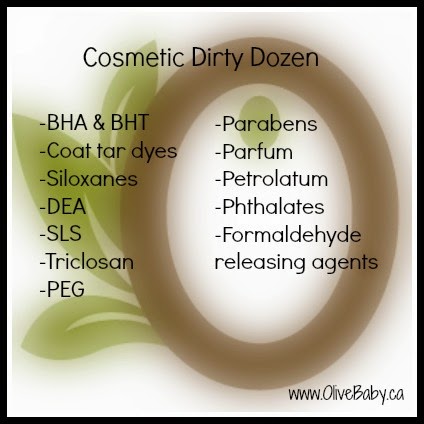 There is still much debate over many of these substances, and the studies are often contradictory. We are left to our own devices to decide whether we want to take these risks, and it is therefore important to have SOME understanding of these substances and how they are listed on our cosmetics and beauty products. The David Suzuki Foundation has done an amazing job compiling a list of the dirty dozen cosmetic ingredients and the studies associated with them. Here is a list of the more common (and harmful) ingredients that you should look to avoid from that research!

Phthalates (dibutyl phthalate, or DBP): These hormone disruptors can be found in nail products and solvents, but they may also be part of a perfume or fragrance included within a product (without having to be listed!). DBP is absorbed through the skin and is known to cause genetic mutations. In lab testing DBP caused problems with reproduction, and caused harm to the unborn fetus. When very young children put products with DBP in their mouths for extended periods of time it was capable of causing liver and kidney failure. Phthalates have been known to cause early puberty in children, obesity and insulin resistance in men

Parabens: These chemicals are often found in fragranced products (although not listed due to trade secrets) and are also widely used as preservatives (methylparaben; butylparaben; ethylparaben), and are known to be both hormone disruptors and to affect male fertility (due to its ability to specifically mimic the hormone estrogen). Parabens have been found in breast cancer tissue, suggesting a possible link between parabens in cosmetics and cancers. Currently there is no regulation in Canada in regards to its use, but internationally there are stronger regulations.

Fragrance/Parfum: There are several thousand chemicals that can be used to make a fragrance or parfum, none of which have to be individually listed in an ingredient list, and any of which may be a source of irritation or toxicity. Interestingly, even ‘unscented’ products may contain a fragrance and then include an agent that masks the fragrance by tricking your olfactory system into not detecting it! Fragrances of any kind are often triggers for individuals with multiple chemical sensitivities, allergies and asthma, and are implicated in triggering asthma in children. Some fragrances are known to ‘bio-accumulate’ in fatty tissues, which can then trigger sensitivities, cause neuro-toxicity, and some are even implicated in a variety of cancers. Certain fragrances are combines with agents such as phthalates which enhance their performance. As discussed earlier, phthalates are implicated in a variety of hormonal-disruptive conditions.

BHA/BHT: (butylated hydroxyanisole and hydroyxytoluene) This synthetic preservative is used in moisturizers, lipsticks and foods. It is a suspected endocrine disruptor (mimics estrogen and supresses male hormone output) and linked to tumor formation. Harmful to wildlife. Flagged for future assessment it goes unregulated in Canada, but European Union guidelines prohibit its use. The state of California requires warning labels on products that use BHA.

Petrolatum: Otherwise known as ‘mineral oil’ or ‘petroleum jelly’ this ingredient is used as a moisture barrier or to ‘lock in’ moisture. It is found in moisturizers, lip balms and hair products to create gloss or shine. Petrolatum containing products are often contaminated with polycyclic aromatic hydrocarbons (PAH), implicated in irritations, allergies and cancers. The European Union has banned their use in cosmetics, but Canadian regulations are only in the works.

SLS (Sodium Laureth Sulfate): Added to soaps, bubble baths and cleansers to make them foam and bubble. Often contains ethylene oxide and dioxane, which is linked to reproductive disruption and certain cancers. These substances also take a long time to degrade and therefore are persistent in our environment once flushed down the drain. These substances are banned from use in cosmetics by Health Canada, however the substances in which they are found are not adequately screened for their

DEA (diethanolamine): Used to make cosmetics more creamy, sudsy and foamy and also as a pH balancer to decrease the acidity of the product. Look for them in moisturizers, sunscreens, shampoos and cleansers (lauryl DEA and cocamide DEA). DEA can react to form a product called nitrosamine, which is linked to cancers (this often happens when the nitrate-containing preservatives in cosmetics begin to degrade). DEA is also a skin and eye irritant and is toxic to wildlife. Health Canada has categorized them as "moderate human health priorities” and has flagged them for future research, however they go unregulated in Canada. The European Union has stronger regulations on their use, restricting their concentration in cosmetics.

Siloxanes: This is a substance most people wouldn’t think to look for, and it comes under several different names – they are all from the ‘silicone’ family (dimethicone, cyclomethicone, any ingredient ending with "‘siloxane’). They are used to create a smoothness and silkiness to products, and it helps products like deodorants ‘slide one’ more easily. Several variants of the siloxane family have shown to have carcinogenic potential (uterine tumors), affect both fertility and immunity, and bio-accumulate in the environment (aquatic wildlife).

PEG compounds: (polyethylene glycols) These potentially cancer causing agents are found in many cream bases, creating a creaminess to the product and increasing it’s absorption. Unfortunately PEG compounds are not regulated in Canada, and are often contaminated by several other restricted substances, making them dangerous in our cosmetics.

Triclosan: This preservative and anti-bacterial agent is in many products such as soaps, deodorants, hand sanitizers, facial tissues and many household items such as toys, linens and garbage bags! It’s use is causing wide-spread bacterial antibiotic resistance and is harming wildlife due to its widespread use and accumulation in our environment. Triclosan easily absorbs through the skin and can be found in the urine of nearly 75% of our population! Although Health Canada limits it’s use to 3% of a cosmetics ingredients, due to its widespread use these seemingly small percentages are adding up!

Coal tar dyes: p-phenylenediamine and colours listed as "CI" followed by a five digit number (in the 75000 and 77000 series, respectively). This is a tricky area because some natural pigments are also given these number codes. In the US the colour name may also be listed (e.g. "FD&C Blue No. 1" or "Blue 1"). These pigments are more prevalent in the darker hair dyes, and are derivatives from petroleum manufacturing, which is linked to certain cancers.

Posted by OliveBaby.ca at 12:40 PM No comments:

It's FINALLY here! We're pleased to announce the launch of our Head-to-Toe Body Wash REFILL Concentrate!! This economical option is enough to make 7-10 bottles of our popular 200mL foamer bottles. To read more go to our website, and don't forget to sign up for our newsletter (on our website) to receive an introductory coupon for the month of September! 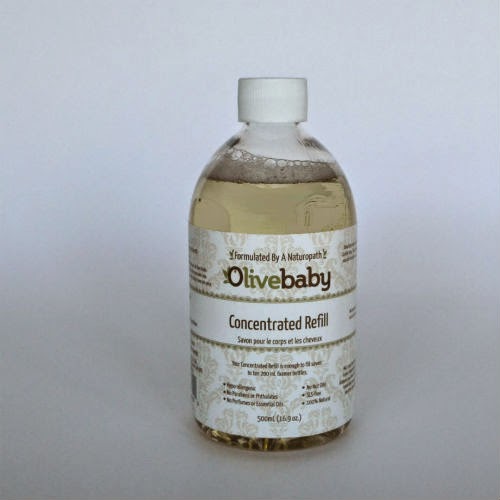 Posted by OliveBaby.ca at 3:35 PM No comments:

It's one thing to love your own product - it's clearly another to receive rave reviews from others.
We want to take this opportunity to personally thank Roxanne, of
Bonjour Bliss Blog
for the sweet product review she posted on her blog yesterday.
It's always so exciting to hear how our valued customers use our sweet
Olive Baby
products! 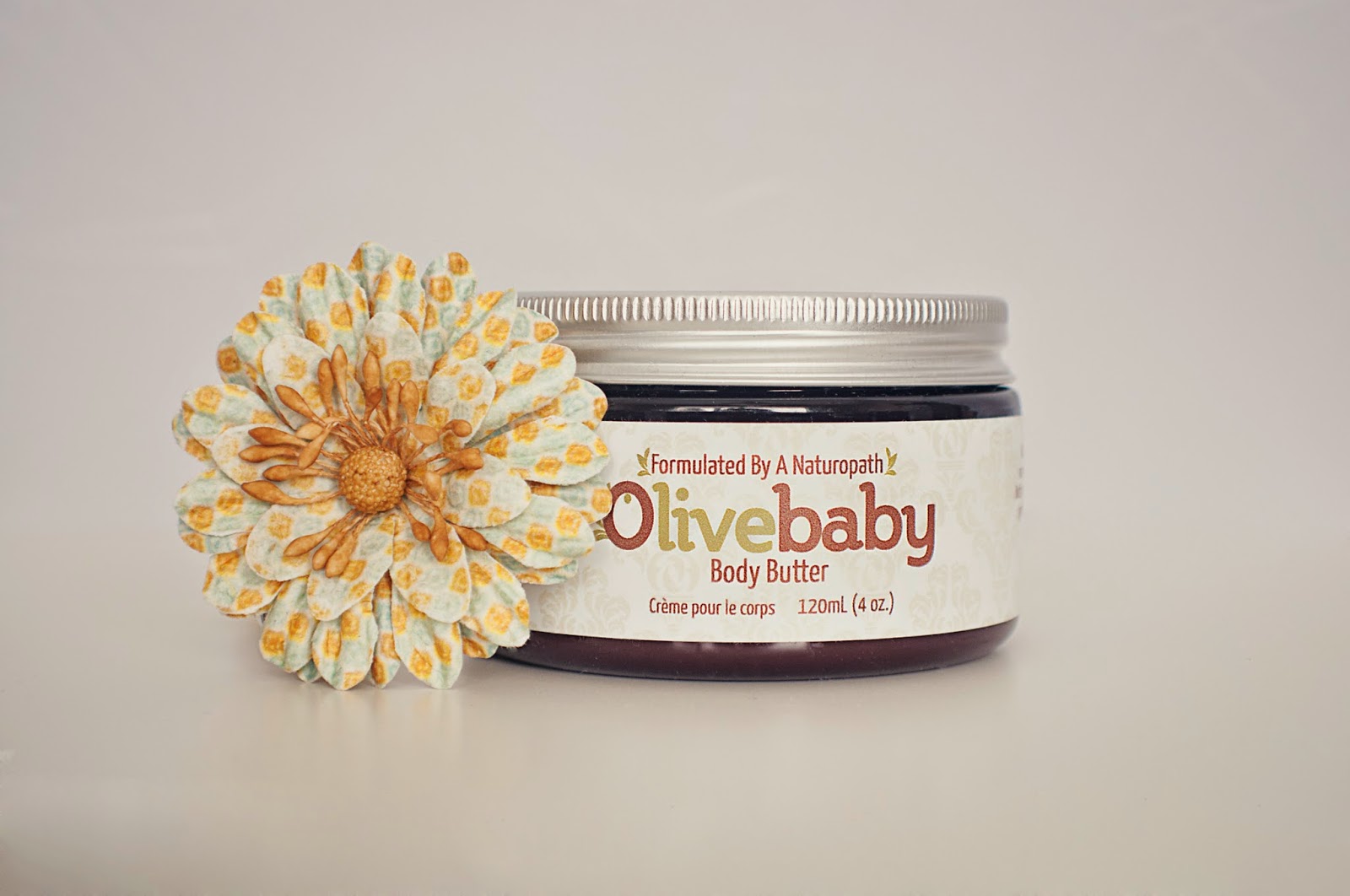 So, from all of us here at Olive Baby, thank you!

Posted by OliveBaby.ca at 9:41 AM No comments: 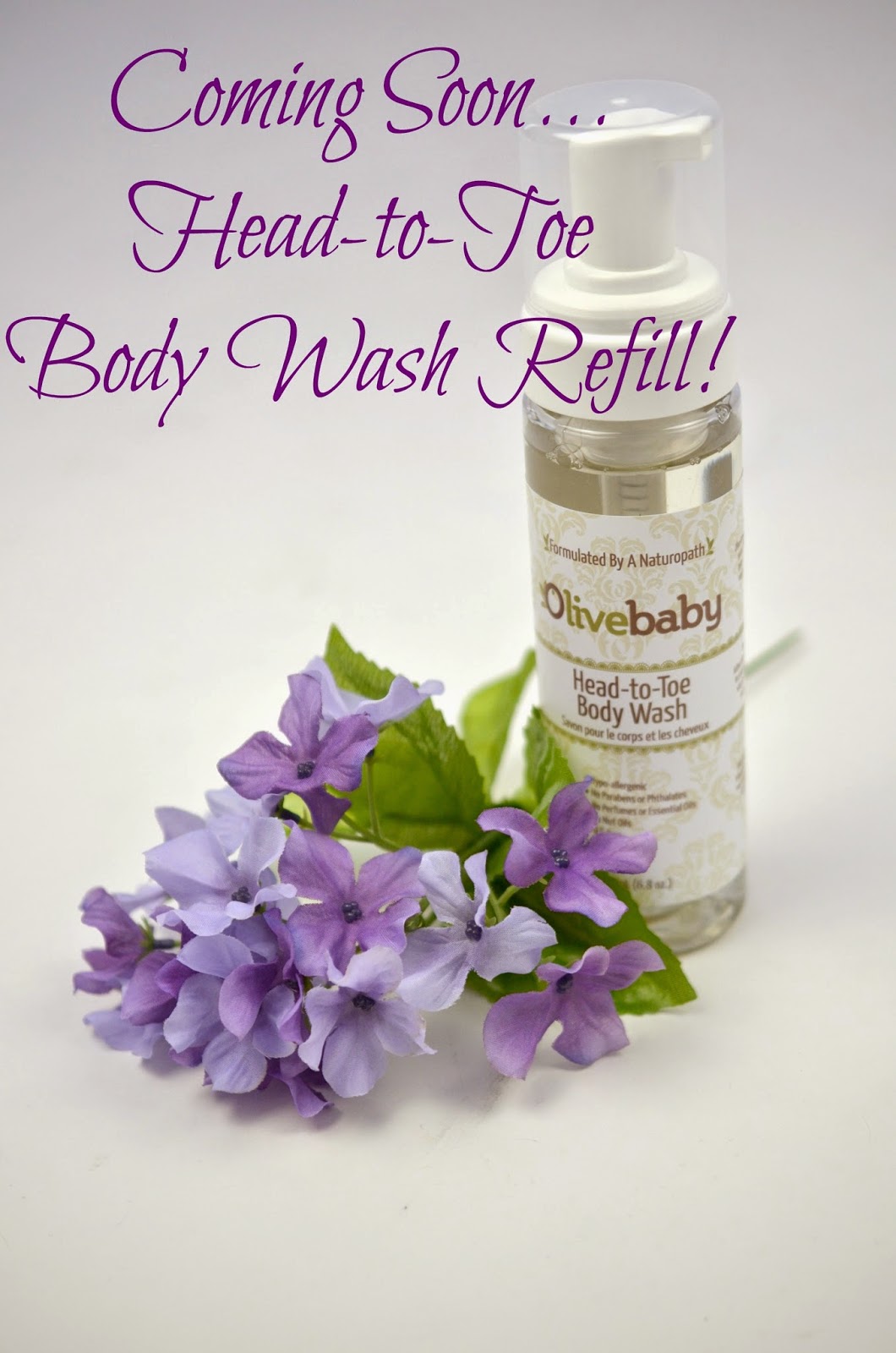 We're super excited to be in the final stages of launching a few
new products to our awesome Olive Baby lineup!
So, be sure to stay tuned for upcoming updates and promotions!
You're going to love them!

Posted by OliveBaby.ca at 8:52 AM No comments:

Say No to Harmful Chlorine! 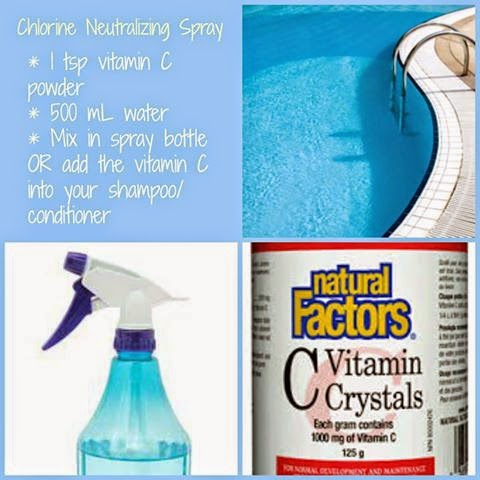 It's pool season and your skin and hair may need a little extra TLC from all that chlorine exposure. Not only is this chemical drying, but is also known to be a powerful irritant.
To diminish it's effects, make up a bottle of this simple, cheap neutralizer and spray all over your body and hair, wait a few seconds, rub all over and then rinse!
Vitamin C powder can also be added directly into your favorite body wash or conditioner.
Don't forget, our Body Butter makes a wonderful barrier BEFORE swimming to minimize the amount of chlorine absorbed into your body!

Posted by OliveBaby.ca at 11:46 AM No comments:

Formulated by a Naturopath (& Mother).
Parent and Baby Approved, Olive Baby is a Labour of Love! Our 100% All Natural Skin Care Line is ideal for the entire family! Natural. Simple. Gentle.

So happy you stopped by!

Our 100% All Natural Products 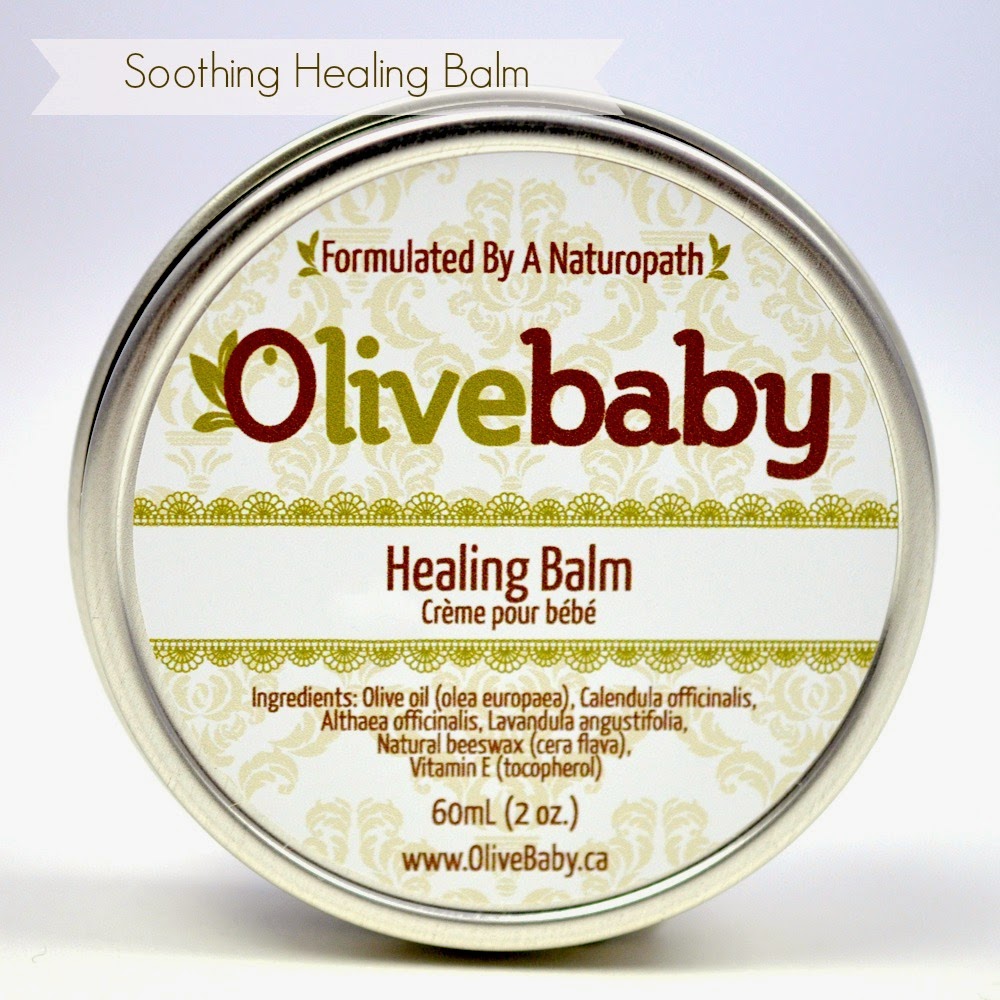 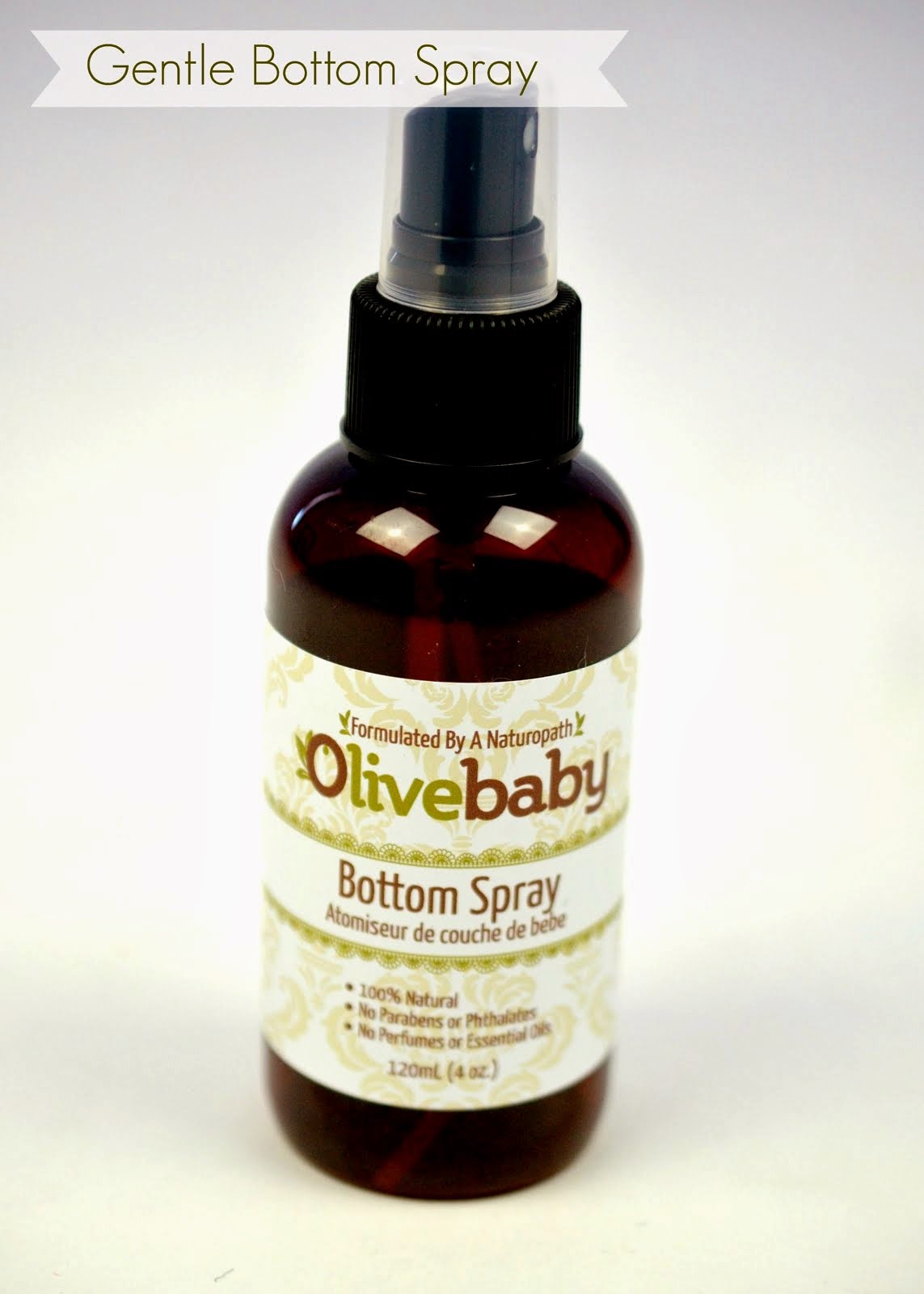 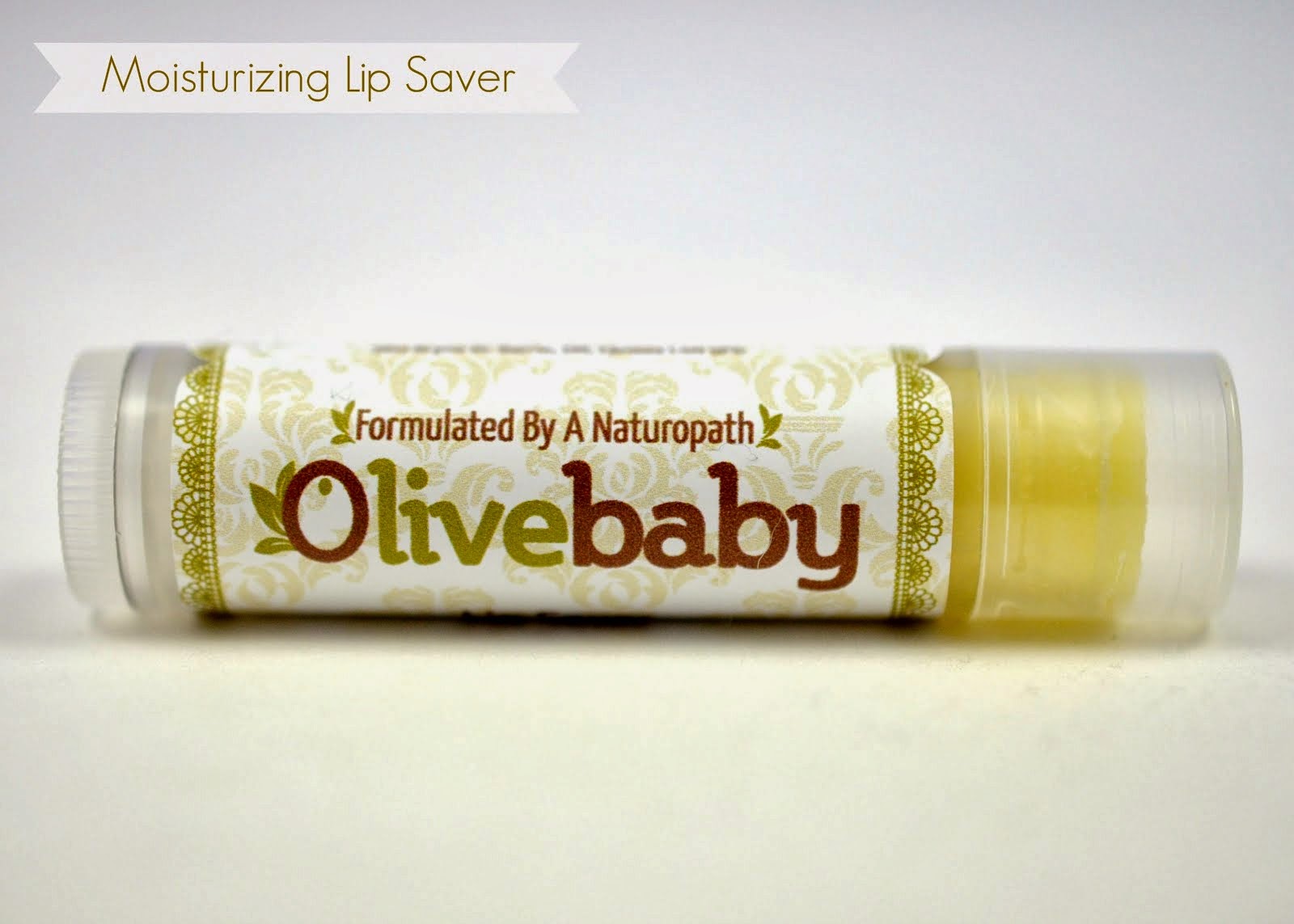 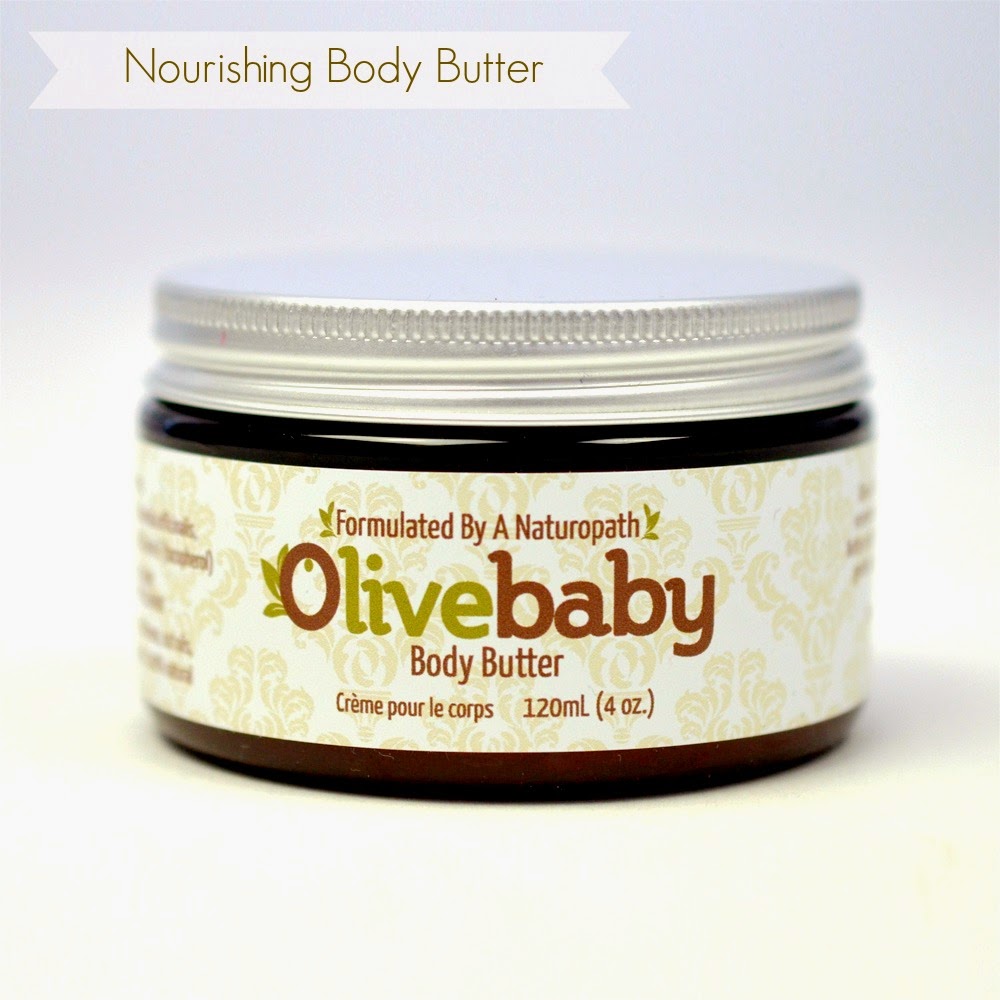 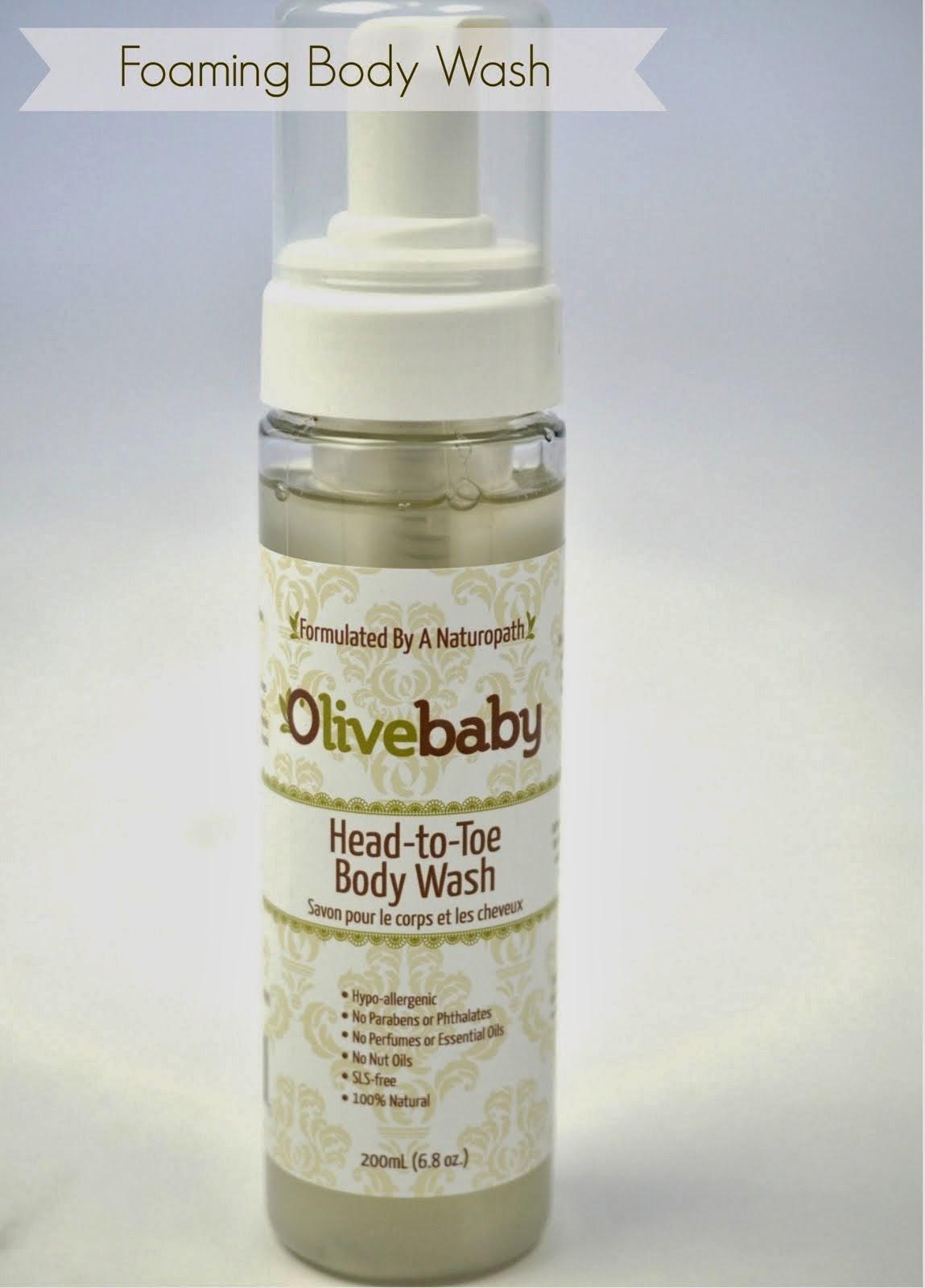 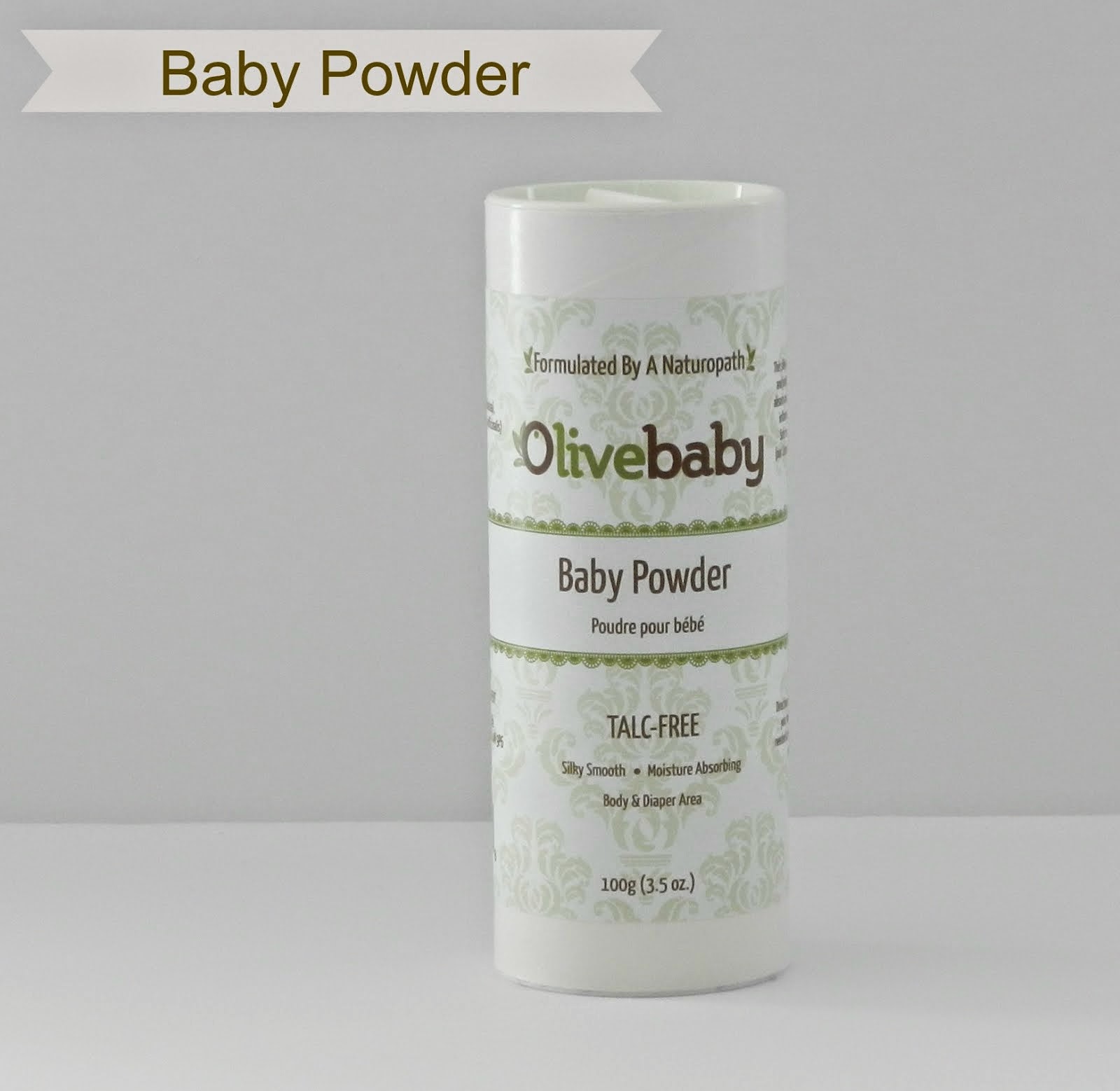